SpatialKey is now part of the Insurity family!

Click below to find all the latest information on the SpatialKey solutions.

If you care about what’s happening in the world of property and casualty (P&C), then this is the place to be. Each week, we serve up a bite-size roundup of the latest news, hot topics, and (admittedly subjective) tidbits to keep curious insurance professionals, like you, in-the-know.

“We got cows!” This memorable line from the movie Twister came when a cow was hurled by a tornado in front of a truck driven by two storm chasers. A tornado can pick up just about anything, and while flying cows may not be on most insurers’ minds, they do need to worry about the impact 200+ mph winds could have on their books of business.

SpatialKey Inc. (SpatialKey) is pleased to offer its insurance clients access to hazard data from HazardHub, a risk data provider. HazardHub specializes in developing proprietary models and processing past event data to help underwriters and exposure managers better understand the probability of future property damage, in order to write profitable business and maintain a strong portfolio. 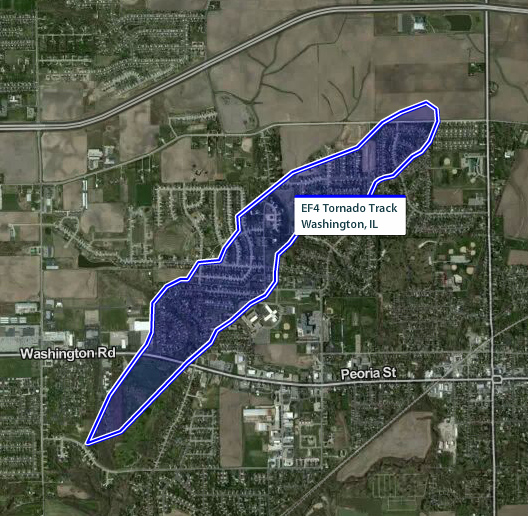 To help businesses respond to the devastating tornadoes experienced across Illinois on November 17th, Willis Re has made preliminary footprints of the tornadoes available to SpatialKey clients free of charge and without restriction. Other experts, like Weather Decision Technologies (see Moore, OK article), are also analyzing the scope and impact of this event, and their data can be provided upon request.

Map of May 20 and 31 Oklahoma Tornadoes with Population Density

The past two weeks have been devastating for Oklahoma. Multiple tornadoes have touched down in and around Oklahoma City, causing massive damage and the loss of 42 lives. First, on the afternoon of May 20, 2013 an EF5 tornado hit Moore, Oklahoma. Then only 11 days later a series of tornadoes hit the same general area, striking El Reno/Yukon (to the west of Oklahoma City) and multiple sites within Oklahoma City (the western, central, and eastern areas of the city were all hit). 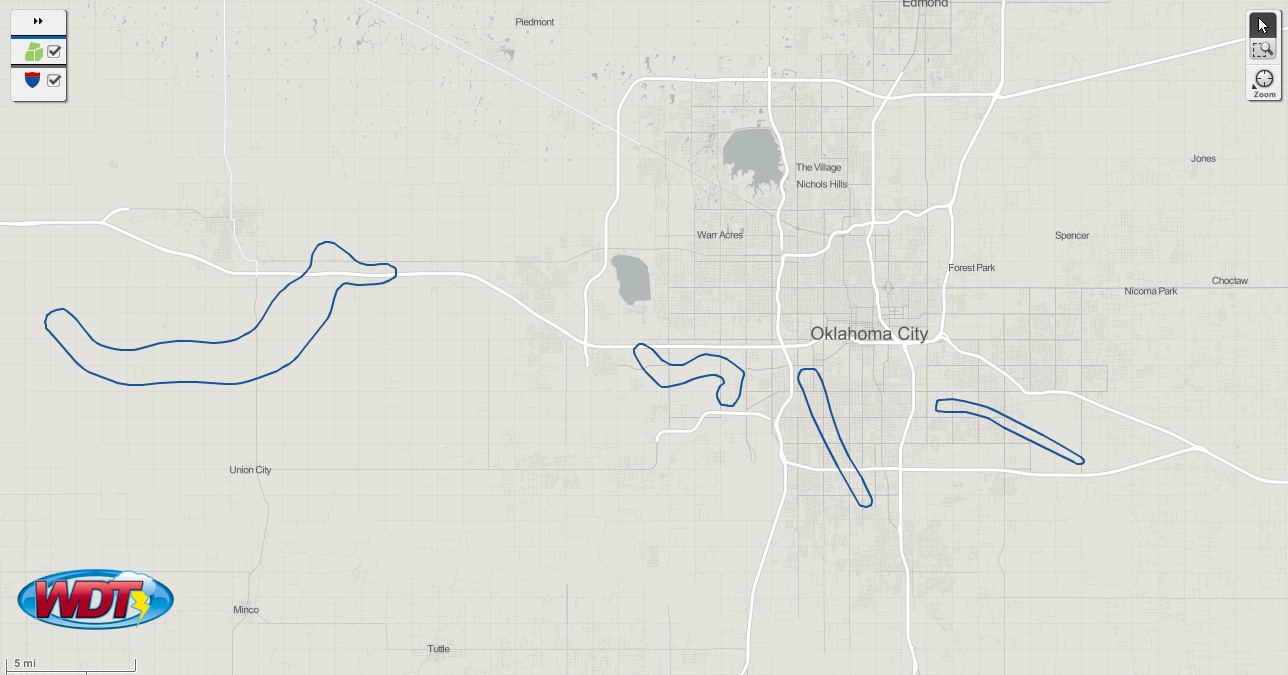 Following on the heels of the devastating Moore, Oklahoma tornado, a set of tornadoes touched down near Oklahoma City on Friday evening. Together with Weather Decision Technologies (WDT), we are able to provide access to hand-drawn storm footprints from WDT meteorologists based on the analysis of High-Res Level 2 Dual-Polarization Radar data. 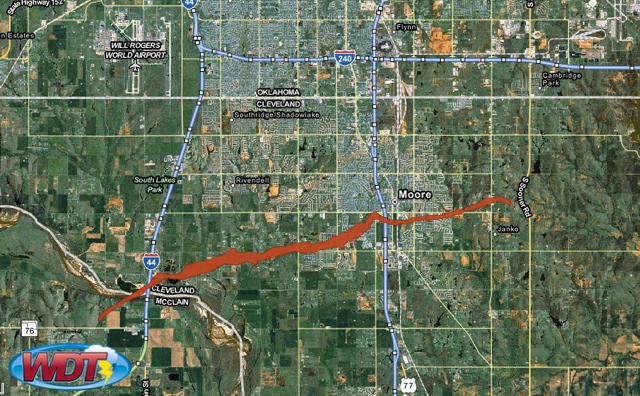 Weather Decision Technologies (WDT) and NOAA have provided additional resources to help you further understand the impact of the Moore, Oklahoma Tornado. These resources are now available immediately to SpatialKey users through the SpatialKey Data Mart. You now have the latest intelligence at your fingertips to quantify the impact to your operations and customers through rich, visual analytics in SpatialKey's Map Analyst product. 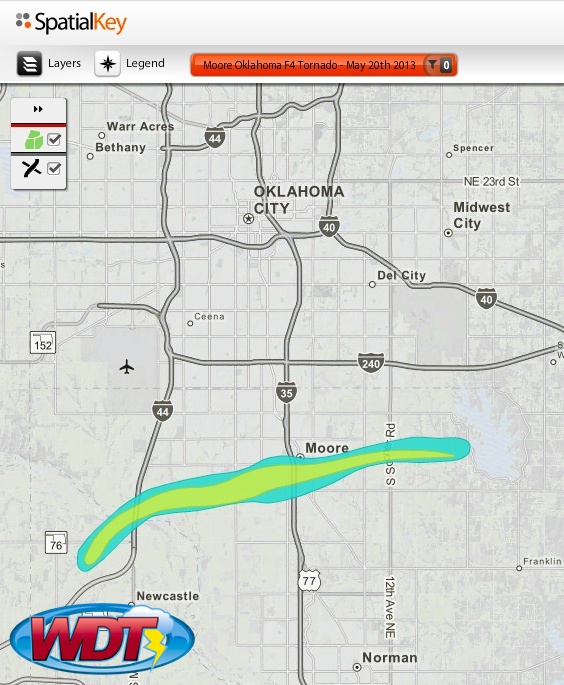 To help businesses respond to the unfortunate tragedy experienced in Moore, Oklahoma on the afternoon of May 20, Weather Decision Technologies (WDT) has provided a preliminary footprint of the EF4 tornado free of charge and without restriction. SpatialKey has distributed this data to its insurance clients via the Data Mart for efficient impact analysis and mobilization of response efforts. 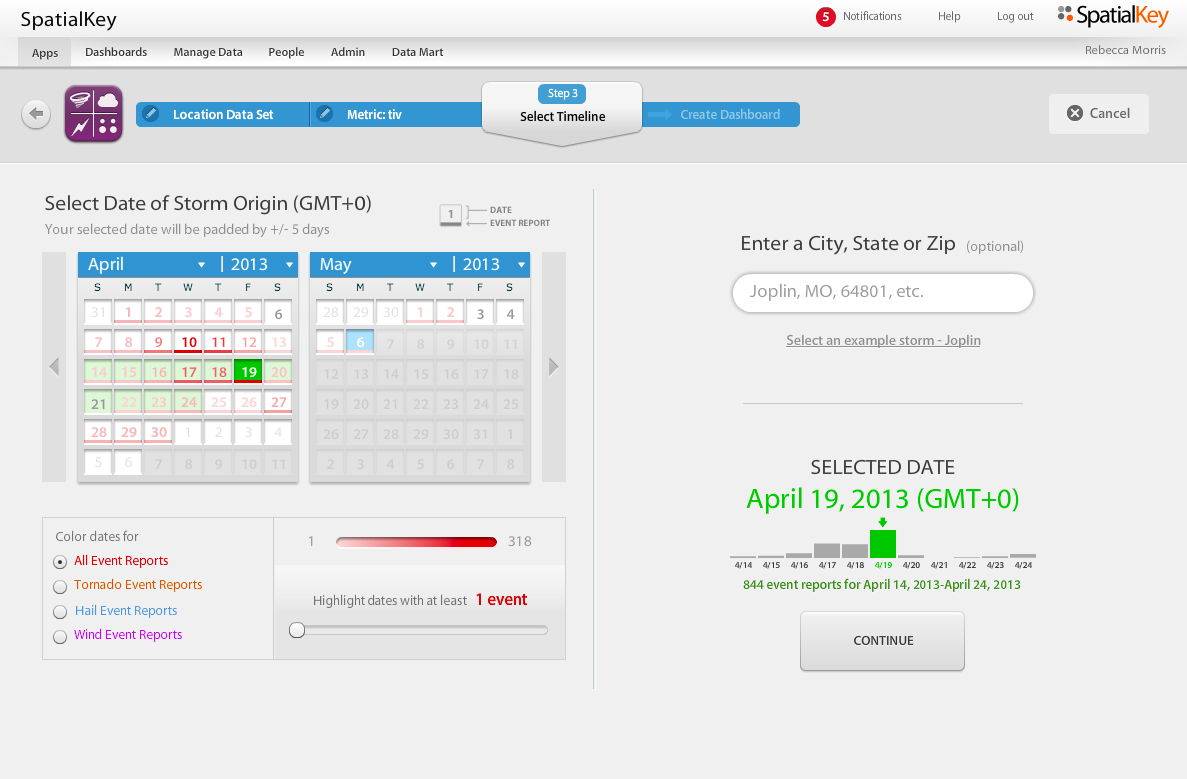 The Severe Storms app is ready for its first full severe storm season!

Released last September, the Severe Storms app enables insurers to understand loss potential associated with live and historical U.S. tornado, hail, and straight-line wind events. To illustrate key features and workflow of the Severe Storms application, let's review its capabilities in the context of the April 19 storm outbreak in the Tulsa, OK area.

SpatialKey allows insurers to assess exposure to damaging events, including the tornados and straight line winds currently underway in the US. We're focused on making this easier than ever, so that insurers can gauge potential impact as quickly as possible. We've integrated with NOAA SPC's Event Report feed to not only visualize these event reports, but to provide a summary of an insurer's total exposure in proximity - in near real time.

Insurance Analytics tornado
All posts Next

Visit our resources page for quick access to our P&C guides and webinars.